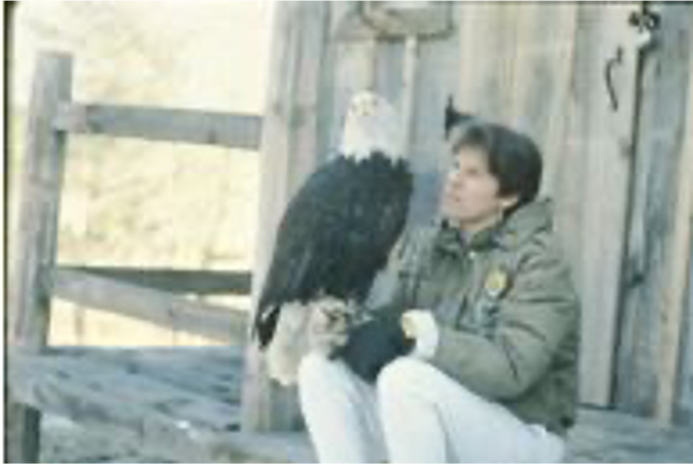 In her words, Dianne Benson Davis observed, “The education I received from the Worcester Public Schools provided support, guidance and inspiration that continues to serve me to this day. At Tatnuck Elementary School, Miss Marjorie Smith, an Audubon instructor, was invited to our 5th grade class. She introduced me to the world of nature. The librarian at Chandler Junior High showed me the book, Summer of the Falcon, which heightened my interest in falconry and birds of prey. My guidance counselor, Mr. Jeauno, made me aware of the agricultural program, studying animal and plant sciences, at Burncoat Senior High which was not my quadrant’s school. I was the only girl in the program. Burncoat provided me with a work study opportunity by earning credit at the Worcester Science Center as an animal caretaker and volunteer in a newly created Junior Naturalist program. After high school, the Science Center hired me as a zookeeper.”

Dianne expanded her involvement with wildlife by becoming a licensed wildlife rehabilitator, the first female falconer in Massachusetts, and by co-establishing with her then husband, “It’s an Animal’s World”, giving educational programs using live animals throughout Worcester County. In 1985, Benson Davis was asked by the Mass Wildlife to raise and release eight young bald eagles at Quabbin Reservoir as part of an effort to bring the bald eagle back to Massachusetts as a breeding bird. She lived alone in a pop-up tent trailer with no running water or electricity for three months in a remote site, caring for her eagles on a 30’ nesting tower. Between 1982 and 1988, 41 eagles were released.

Dianne then moved on to Tufts Veterinary School where she taught students how to catch and restrain a variety of wildlife such as eagles, fox and snakes, do physical examinations, take x-rays, draw blood, bandage and how to get them to take medicine. As a single mom and working two jobs, she graduated from Worcester State earning a bachelor’s degree in Natural Science. Her husband, Bill Davis, who was a biologist with Mass Wildlife, and she offered programs about endangered species and habitat needs in schools and brought with them a live, non- releas- able bald eagle. After Tufts, Benson Davis worked as Natural History Guide for Mass Audubon. In 2002, she returned to the Science Center, now the EcoTarium, as their Certified Wildlife Veterinary Technician, caring for their animals including bald eagles, a polar bear, hawks, owls and reptiles. Twenty-seven years after her part in raising bald eagles at Quabbin Reservoir, she wrote a book about that and other wildlife expe- riences entitled: Eagle One — Raising Bald Eagles, A Wildlife Memoir. There are now over 80 pairs of eagles nesting in Massachusetts with 700 chicks raised and fledged over the last 30 years.

Retiring from the EcoTarium in the spring of 2018, Dianne continues to give educational presentations about wildlife to various groups and enjoys spending time outdoors volunteering for the Greater Worcester Land Trust and with her family. She says, “I am truly grateful to the people within those Worcester schools who took a personal interest in my education, well-being, and potential as they truly had a life changing impacts on my future.”